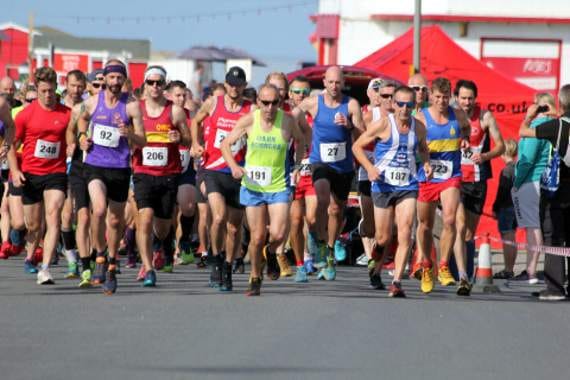 The race getting underway outside of the Crooklets Inn. Pictures: Paul Hamlyn

THE annual Bude Pirate Run, which is organised by Bude RATS (Running and Triathlon Society) was held on Sunday, September 8, with 226 competitors taking part.

The race was part of the annual Cornish Multi-Terrain Race Series, which consists of ten races and attracted entries from all over the South West.

Starting at 10.30am, runners sped off from outside The Crooklets Inn for an 8.3-mile run with over 1000ft of climb. The course took the runners over a challenging course through the countryside to Duckpool, before the runners then returned along the coast path, scaling several steep climbs along the way.

Despite the challenges of the run, the first runner, Dan Goodway (Truro Running Club), sprinted across the line in 55 minutes and 14 seconds. He was closely followed by Tom Carthey of Falmouth Road Runners in 55 minutes and 27 seconds and Alex Peyton-Jones of Plymouth Harriers in 56 minutes and 28 seconds.

While he may have been disappointed with second place this year, Carthey was pleased that his course record of 55:05 seconds still stands.

The first female runner was Ami Yetton of Plymouth Harriers in one hour, five minutes and 17 seconds. She was closely followed by Emma Baker of Launceston Road Runners (1:06:15) and 15 seconds. In third place was Joanne Page (Okehampton Running Club) in one hour, seven minutes and 50 seconds.

The first Bude RAT to finish was Jez Brown in 59 minutes and 41 seconds, which earned him tenth place with athletes continued to complete the course for the next two and a quarter hours.

The athletes participating came from all over the South West and ranged in age from 17 to 73, while finishing athletes were rewarded with a medal and a pasty.

As well as the awards for first three places, awards in the male age categories went to:

Female awards went to the following:

The first four runners from a club make up the club team. The winning males were Falmouth Running Club with Truro Running Club taking the honours in the female category.

Reflecting on the day, race director, Phil Aldis, said: “The organisers would like to thank their sponsor Tommy Jacks for their support with the run, Tasty Pasties for the wonderful ‘tasty pasties’ and The National Trust for their support. There were an incredible number of people involved in making the event a success and I was proud to be part of such an incredible team. There was a wonderful atmosphere and some outstanding running.”