Final rail user gets back on board decades later 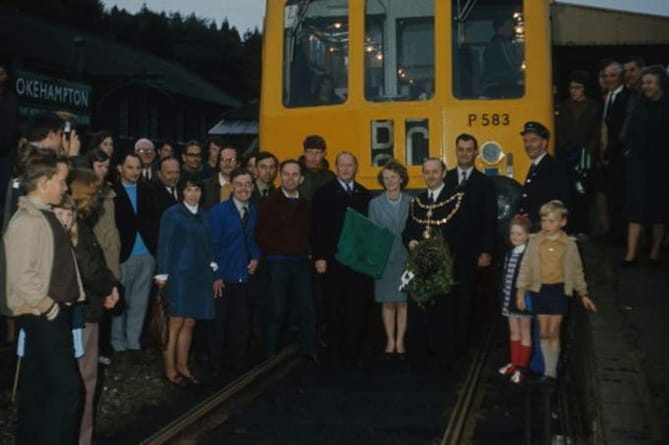 Pictured in 1972 members with the last train to Okehampton

THE Launceston Railway Circle has extended its support to the reopening of the Dartmoor Line which will reconnect communities thoughout Devon and Cornwall, giving passengers the chance to chose rail over road and travel on a ‘greener and cleaner’ mode of transport.

In June 1972 it was reported in the Cornish & Devon Post that on Saturday, June 3, members of the Launceston Railway Circle travelled to Exeter to catch the last train to Okehampton. It was also reported that the secretary of the circle who at the time was the late Lloyd Goodman placed a wreath on the train on behalf of the Railway Circle.

On Saturday, November 20, regular train services between Exeter and Okehampton on the Dartmoor Line recommenced just short of 50 years later — sadly most of those members that were there on the last day are no longer with us.

There is just one remaining, Andrew Bird who was 12 at the time. Andrew is still an active member of the circle and is editor of the group’s ACE Journal.

On the morning of November 20 a number of the present members led by the current chairman Les Whaley and his wife Gloria travelled on one of the first trains to Exeter to meet their daughter and do some Christmas shopping. North Cornwall’s MP Mr Scott Mann was also in attendance to wave them off.

Andrew unfortunately was unable to be there. He did however along with his wife Linda travel on a later train in the afternoon to Exeter and back with Di Goodman the wife of the late Lloyd Goodman and their grandson Tyler.

Andrew and his wife were also invited by GWR to attend the opening celebrations that took place at Okehampton on Wednesday, November 17. This event was attended by many local and national dignitaries. These included transport secretary Grant Shapps who waved the first train off to officially launch the new service. Everyone was then given a free ride to Bow station and back.

It is thanks to the Government investment that Network Rail engineers were able to lay 11 miles of new track and signal update a head of time and we understand under budget which is pleasing.

There is significant investment by Network Rail and GWR in the South West restoring our railways addressing some of the infamous Beeching cuts.

Circle chairman Les added: “We look forward within the next few years to be able to use a Hub Park & Ride Station linking all public transport and cars through out Devon and Cornwall to the East of Okehampton and a passenger service though to Tavistock and onto to Plymouth giving a back up service should there be problems at Dawlish.”