Torridge named the second most recycling-conscious area in England 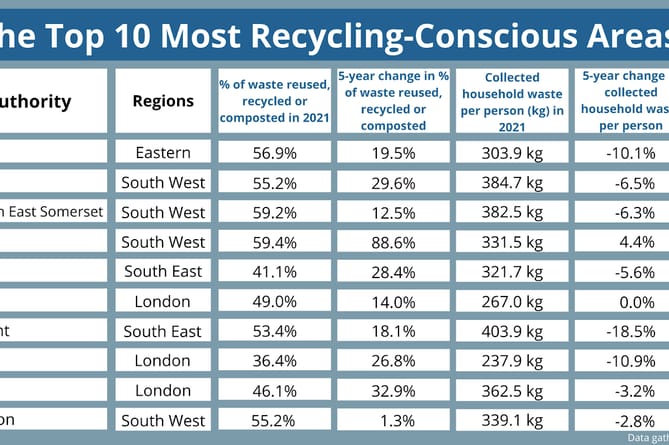 The top 10 most recycling conscious areas ( )

A new study has ranked English areas on their recycling and composting rate and improvement over the last five years, uncovering which places have the best recycling mindset.

Analysis of government data has revealed that Torridge comes in second for recycling and composting waste, and reducing waste output. It follows a deeply concerning UN report on climate change released this year.

Torridge’s rate of waste reused, recycled or composted has improved by 29.6% over the last five years. By comparison, the rate for the whole of England decreased by 7% in the same period.

Plus, in the 12 months leading up to March 2021, Torridge recorded 384.7kg of waste per person, 6.5% less than five years previous. This suggests households in Torridge have become better at reducing their waste output.

The most recycling-conscious areas in England:

The least recycling-conscious areas in England

The study uses data from the Government Department for Environment, Food & Rural Affairs (Defra) to see where households across England are taking steps to reduce waste output and increase recycling and composting rates.

This look into the recycling mindset across England follows the UK government’s pledge to eliminate food waste from landfill by 2030. According to ONS data, households are the biggest contributors to food waste in the UK.

Calls for more to be done

In England, recycling and waste is managed by local councils, with no centralised laws introduced by government. Although Whitehall has set targets for waste to be recycled and separate food waste collection rollouts are scheduled for 2023, there is no accountability.

“While some areas have made incredible progress on recycling in the last few years, England as whole has gone backwards, which is worrying. Just in the UK, our food waste contributes more than 20 million tonnes of greenhouse gas to the environment each year.

“As separate food waste collections come into play, households – and councils – have to do more. They need to become more recycling-conscious, building it into everyday routines and processes.

“Part of that is becoming aware of how useful food waste can be. Very few people realise that we can produce electricity from food waste, which is obviously even more of a benefit when fuel costs are so high. Just dumping food into the bin, however, means we’re doing harm, as well as missing out on energy creation. It really is a habit we need to break.”

“The biggest impact of household waste not being recycled or composted effectively is increased volumes being sent to landfill. This is resulting in the loss of valuable resources from the urban mine. In first world countries, like the UK, it is estimated 40% of food is wasted. Unlike other streams, food waste recycling is the hardest service in which to get individuals to participate, mainly because it can be smelly, gooey and unpleasant to look at and handle.

Increasing household engagement may not lead to increasing tonnages, as in other streams, as people often feel guilty when putting out full food waste caddies and this can lead to a reduction in the amount of food they waste in the future. Therefore, changing mindsets to recycle food waste will encourage people to be more conscious of what they are wasting, subsequently waste less and ultimately be less impactful on our planet.”