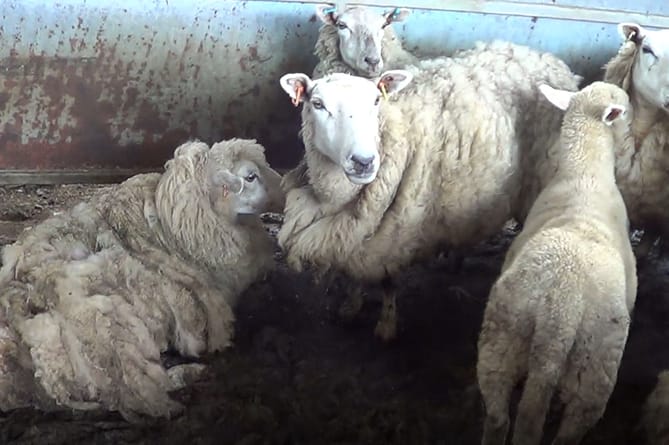 A sheep farmer from Callington has been given a 4-month suspended prison sentence and has been banned from keeping sheep for 10 years after failing to provide adequate care for his animals and not properly disposing of sheep carcases.

At Bodmin Magistrates’ Court on April 12 2022, Benjamin James Bennett, aged 41, from Callington, pleaded guilty to failing to care for sheep and failing to dispose of sheep carcases. Mr Bennett, who previously received a caution for cruelty offences in 2019, was given a 4-month custodial sentence, suspended for 18 months, and banned from keeping sheep for 10 years.

On July 22 and 23 2021, inspectors from Cornwall Council’s Animal Health Team and DEFRA’s Animal and Plant Health Agency visited North Kingston Farm in response to a complaint.

On August 5 2021, the inspectors returned to the farm and discovered further breaches of legislation.

Inspectors found sheep being kept in an unsuitable environment with access to hazardous items including sheet metal cladding and sheep carcases. Two sheep had been caused unnecessary suffering and were emaciated with other sheep having an inadequate diet.

Some of the sheep had flystrike, a painful and sometimes fatal condition caused by flies laying their eggs on another animal, and had not received prompt or effective treatment.

The Court was told that due to a family dispute the size of the farm had been reduced and as a result Mr Bennett had sought employment elsewhere to supplement his income. This job took his time and was away from the farm so he couldn’t look after the sheep properly.

During sentencing the magistrates gave credit to Mr Bennett for the early guilty plea but said that the severity of the offences passed the custody threshold. They appreciated that Mr Bennett had taken on some of the advice he had been given but he had not done enough to address the situation. In giving Mr Bennett a disqualification from keeping sheep for the next 10 years they stated this would allow Mr Bennett time to get his life back in order. The ban is suspended for 28 days to give Mr Bennet the opportunity to dispose of his sheep.

Jane Tomlinson, Trading Standards Manager Cornwall Council, said: “This case was brought after inspectors had given Mr Bennett advice and guidance on several occasions. Mr Bennett clearly did not take that advice leading to welfare issues with his sheep and a disregard for the requirements of the animal welfare legislation regarding the disposal of carcases.”

Councillor Martyn Alvey, Cornwall Council portfolio holder for Environment and Climate Change said: “When advice and guidance are given, but not acted on, we will not hesitate to pursue formal proceedings. Allowing sheep access to hazards, failing to provide them with an adequate diet, failing to treat them for flystrike and leaving dead sheep to rot in fields is completely unacceptable. I welcome the Courts decision to keep animals safe and to protect the reputation of the Cornish farming industry.”