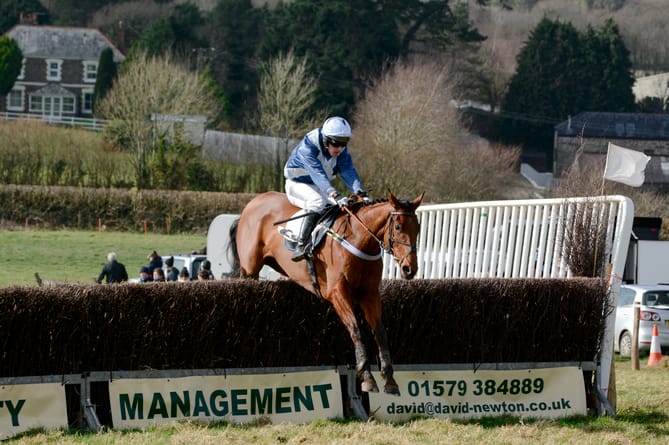 THE Dunsmore Racing Club hosted an entertaining days racing on lovely jumping ground at their course near Silverton, Devon.

The six races attracted a total of 43 runners featuring riding doubles for Will Biddick and Jack Andrews. In addition Keagan Kirkby partnered his first winner and Martin (Fly) McIntyre got up after a nasty fall in the fifth race to bounce back with a winner in the last.

The first race was delayed for 30 minutes due to an accident on the M5 which held up some horses and participants travelling south.

When Davidstow was on the Formula 1 calendar

Rural impact among reasons for refusal for planning application in Alternun

“Give ‘em the old razzle dazzle”

It was soon business as usual however for the National champion trainer Tom Ellis who came from Warwickshire to saddle his four-year-old Vinnie Sparkles to set up a double for his brother in law Jack Andrews. The well backed favourite cruised to a six lengths victory in the opening Maiden for four and five-year-olds sponsored by Goffs UK Tingle Creek Sale. This provided his rider with his first success since rejoining the amateur ranks after a short but lucrative spell as a professional conditional jockey. “I had a ride in an Irish point the other day after taking part in the Lorna Brooke memorial race at Fairyhouse, but Vinnie Sparkles was my first ride in England since coming back. He took a circuit to warm up and we missed two out,” reported the 24-year-old who was champion point-to-point jockey in the curtailed 2019-20 season. The rider has some way to go to emulate his sister Gina, nine times National champion lady rider, employed on this occasion as leader up for her husband Tom’s charge, and leading him into the winner’s enclosure with a beaming smile.

“We bought Vinnie Sparkles privately in Ireland,” said the trainer, who specialises in selling on young pointers. “This chap’s home work has been solid. He is very straightforward with a good attitude. We have a nice bunch of 58 horses this time.”

Jack Andrews was soon back in the winner’s enclosure, this time as a late replacement for intended jockey Milo Herbert for the Robert Chanin trained Call Simon in the Heltor sponsored Conditions race. A shrewd judge of pace, the tall young rider conjured a strong challenge on the climb to the judge to collar Paloma Blue and Hunting Percival inside the last 100 yards. Seven-year-old Call Simon was following up his recent Great Trethew success in the colours of local owners Andrew and Sue Knox and Maureen Chanin. The trainer is also chairman of the Dunsmore Racing Club and explained the late booking of Jack Andrews. “Milo Herbert was booked to ride but phoned from the M5 hold up at Weston Super Mare so I found Jack in the changing room. This is a progressive horse and an out and out stayer. Our horses have benefited from a new all-weather carpet gallop we laid down in the summer.”

Will Biddick’s double was initiated as Humaniste toyed with five useful rivals to win the INEOS Grenadier Mixed Open. The wily Biddick was seen at his best, dictating a slow pace before easing eight lengths clear of No Comment with prolific winners Hawkhurst and Moratorium well beaten. The winner’s unusual preparation included four runs on the flat in the summer from Joe Tickle’s yard. He is now in the care of Joe’s partner Danielle Kenealy for owner Kieran Johns whose South Molton company deals in Fire Defence sprinklers. “He can be a bit quirky. He was bought for point-to-pointing last year and Joe and Danni have done a great job with him. Will gave him a superb ride today,” said the owner.

The seven times National champion rider went on to complete his double on the Christopher Barber trained odds on favourite Fiston Des Issards in the Gingerland Livery Ltd Restricted. “He jumped well and lit up when they came at him,” reported the rider returning from yet another canny ride. Now in theownership of Ben and Abbie Rousell and Phil Fry, the seven-year-old had beensold into Gordon Elliott’s yard for £255,000 after winning his Irish point (beating Saturday’s Ascot winner Boothill). He proved disappointing however and was picked up by his current trainer for a much more modest cost at Tattersalls Ascot sales in March.

Persistence paid off for Keagan Kirkby who rode his first winner at the 50thattempt in the Supporters of Silverton Hunt Conditions Veteran & Novice Riders race. The 24-year-old rider showed plenty of confidence when sending Ask for Glory smoothly to the front entering the final circuit to score by 15 lengths. “He settled nicely and it felt easy for him,” remarked the winning rider who works for Paul Nicholls. A winning hurdler for Nicholls, the eight-year-old now runs for the Young & Co Family Partnership and is one of seven pointers stabled with Sam Loxton. Originally another very expensive purchase out of Irish points, “He has had lots of issues,” according to the trainer.  Two wind operations tells its own story.

Martin McIntyre landed the Open Maiden for six-year-olds and over on Firefly Lane following his crashing fall at the ditch in the previous race. The mare held on by a diminishing head as Darren Andrews thrust Takeabid at her in the dying strides. “I kept her a bit wide for better ground and she was game, changing her legs and finding a bit more,” reported the winning rider. The six-year-old Milan mare was bought in Ireland by her owner Edward Darke and is trained by Nikki Frost who said, “She is tough and so nice at home. She will probably have a few spins pointing before moving to the National Hunt yard.”