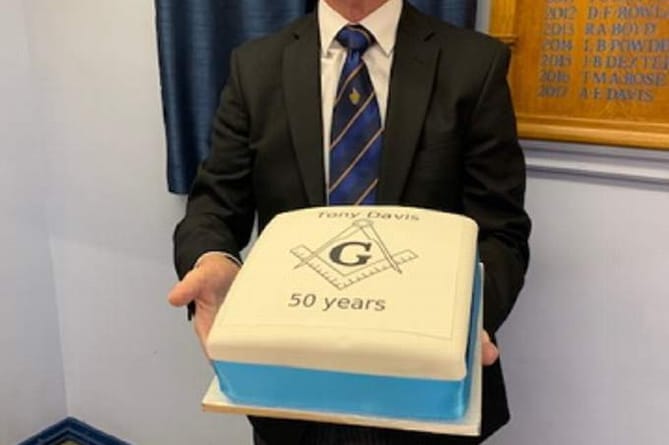 THE members of Granville Lodge No.3405 which meets in Bude celebrated one member’s 50 year commitment to Freemasonry at their first meeting of the new year.

The meeting was held on Tuesday, January 18, and was presided over by the Worshipful Master Graham Shepherd-Jones. There was a full agenda for the meeting with pride of place being the presentation of a certificate of 50 years continuous service to Freemasonry to past Master Tony Davis.

Tony was initiated into the lodge on June 16, 1970 but due to recent COVID restrictions the exact 50th anniversary could not be celebrated. He first became Master of Granville Lodge in 1980 and then again in 2017. He was honoured with several promotions within the masonic province of Cornwall and now holds the rank of Past Provincial Junior Grand Warden. The certificate, which had been signed by the Provincial Grand Master Stephen Pearn, was presented to Tony by Graham who congratulated him on a wonderful achievement and thanked him for his long and active service to the lodge and freemasonry in Cornwall.

After the meeting the members dined in the refectory and the usual toasts were honoured.

At the end of the meal the Worshipful Master Graham had a surprise for Tony and presented him with a large, beautifully decorated cake which due to it’s size Tony was happy to share with the members! .